Excitement for the spring trout fishing season kicks into high gear as the Pennsylvania Fish and Boat Commission (PFBC) is pleased to make its 2022 adult trout stocking schedule available using the FishBoatPA mobile app and website. 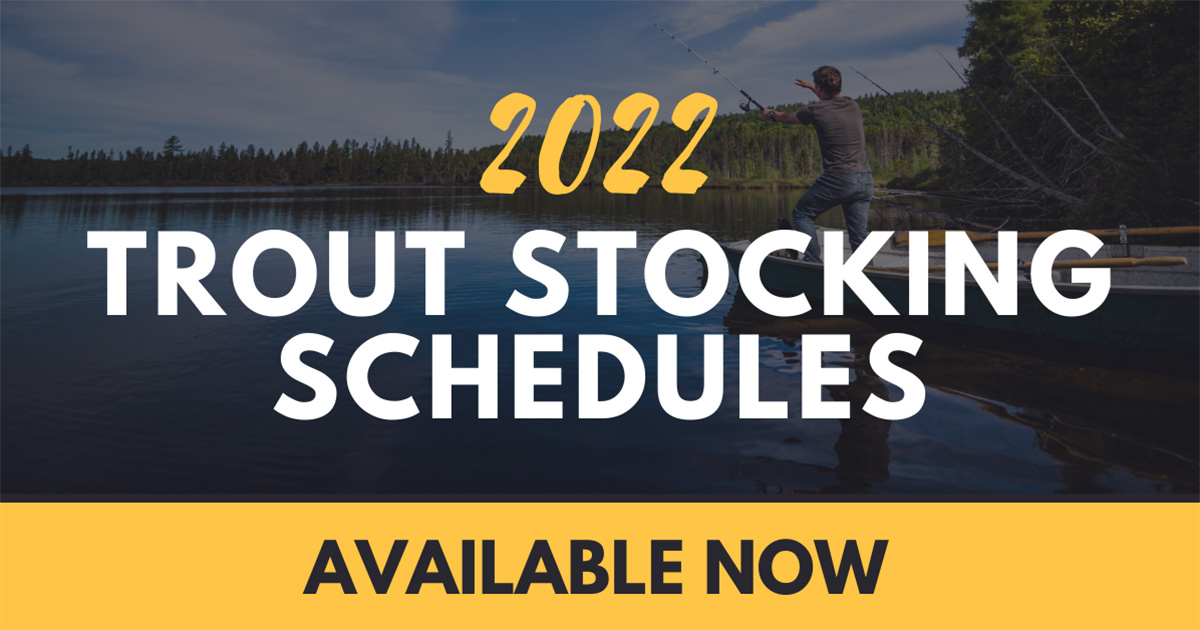 “The release of our trout stocking schedule is always a welcome reminder that spring is just around the corner,” said Brian Wisner, Director of the PFBC Bureau of Hatcheries.  “This schedule is our roadmap for stocking millions of trout into hundreds of waterways across the state before and during the trout season, which is no small task.  Anglers can review the schedule to learn which local waters will be ready for some great fishing in just a few weeks.  So, buy your fishing license early, get your gear ready, and start planning your opening day adventure and fishing trips throughout the season.”

The trout stocking schedule is searchable by county, lists the waterways in alphabetical order, and indicates stocking dates, meeting locations for volunteers, and the species of trout that will be stocked.

In 2022, Pennsylvania will return to a single, statewide Opening Day of Trout Season on the first Saturday in April, which in 2022 will occur on Saturday, April 2.  A single, statewide Mentored Youth Trout Day will take place on Saturday, March 26.  Under this change, which will result in a longer regular season for trout statewide, the practice of holding a separate regional opening day and mentored youth day for Pennsylvania’s 18 southeastern counties will no longer occur.

To accommodate the earlier statewide trout season, preseason trout stocking operations are set to begin the week of February 21.  Anglers should note that fishing is not permitted on lakes and streams designated as Stocked Trout Waters from February 21 to the Mentored Youth Trout Fishing Day and the opening day of the regular trout season in April, unless waters are included in the Stocked Trout Waters Open to Year-Round Fishing program.

The PFBC will stock approximately 3.2 million adult trout in 696 streams and 128 lakes open to public angling.  These figures, which are consistent with the number of trout stocked over the past decade, include approximately 2.2 million Rainbow Trout; 686,000 Brown Trout; and 293,000 Brook Trout.  As with past practice, the average size of the trout produced for stocking is 11 inches in length with an average weight of .58 pounds.

In 2022, anglers will have an excellent chance to catch large, trophy-sized trout.  This year, the PFBC will stock approximately 70,000 brood fish, which are 2 ½ year-old and 3 ½ year-old hatchery-raised Rainbow Trout, Brown Trout, and Brook Trout measuring 14″-20″.  Roughly 70% of these large fish will be stocked into streams and lakes during the preseason prior to opening day of trout season, and 30% will be stocked during in-season replenishment stockings.

In addition to trout raised at state fish hatcheries, PFBC cooperative nurseries operated by sportsmen’s clubs and other groups across the state will add another 1 million trout to waters open to public angling throughout the year.

Once again included in this year’s stocking lists are the Keystone Select Stocked Trout Waters, a program where sections of 24 streams across the state are stocked with large 14″ – 20″ trout and managed under Delayed Harvest Artificial Lures Only or Miscellaneous Special regulations.  Under the program, approximately 10,000 large trout will be distributed among the streams.  The trout will be stocked at a rate of 175 to 225 per mile of stream, which is comparable to the numbers of similarly sized fish in Pennsylvania’s best wild trout waters.

The PFBC will be welcoming volunteers to help distribute approximately 3.2 million hatchery-raised adult trout to hundreds of waterways statewide throughout the 2022 season.  The PFBC is proud to partner with conservation groups, schools, and walk-up volunteers to help spread out the trout in local waterways.  Volunteers are asked to keep the safety of PFBC staff and other volunteers in mind, obey traffic laws while following stocking vehicles, and stay home if they are not feeling well.

To participate in trout fishing and keep trout, anglers ages 16 and older require both a fishing license and a trout permit.

Anglers and boaters can start preparing for opening day of trout season right now by purchasing their 2022 Pennsylvania fishing licenses, launch permits, and boat registration renewals online at www.fishandboat.com, the FishBoatPA mobile app, or by visiting one of approximately 700 retail license issuing agents.  Online customers will notice an improved licensing buying experience, save time, and can avoid long lines in stores when waiting to purchase a license closer to the start of trout season.  Anglers are no longer required to display a printed copy of their fishing license on the outside of their clothing and may simply store their license digitally on their phones.

Each year, the PFBC adjusts its adult trout stocking program based on several factors.  A waterway may be added, extended, reinstated, or removed depending on existing or pending changes to angler access, changes to designations on streams managed for wild trout populations, water quality issues that may threaten the survival of stocked trout, and maintenance being performed to dams and other infrastructure that result in the drawdown of impoundments or decreased water flow.