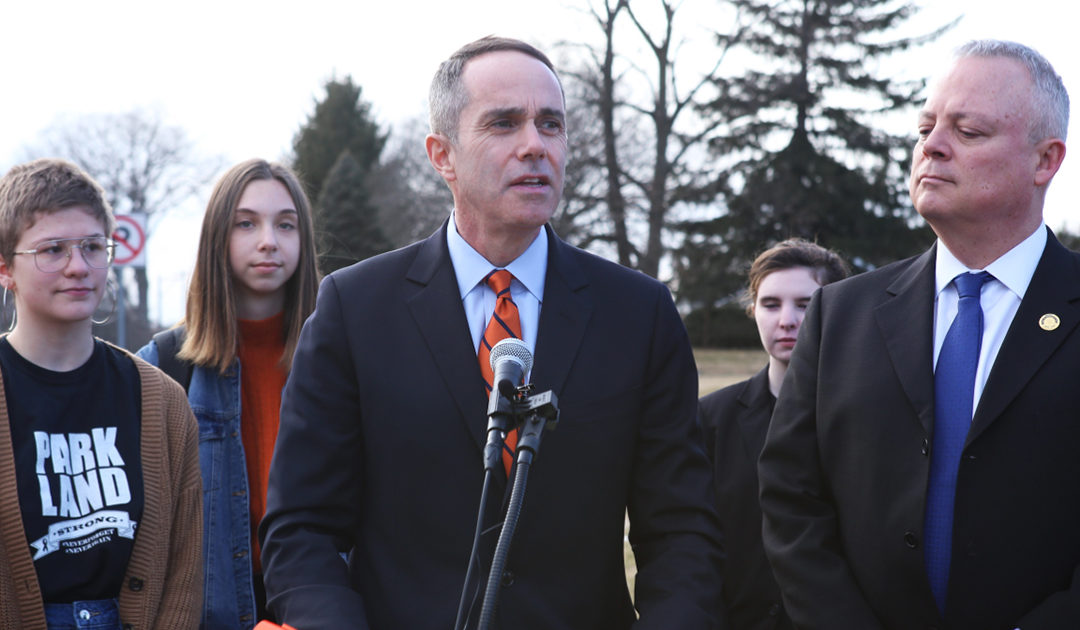 Santarsiero, Warren’s predecessor in the State House, has been a leading advocate for gun violence prevention legislation since 2012 when, shortly after the tragedy in Newtown, CT, he offered legislation to require background checks on all gun purchases.  He began Thursday’s press conference by noting that the fight to end gun violence has been a long one.

“I know this has been a long and often frustrating road for those of us who have been working on this issue for years now. But as we stand here today on the first anniversary of the shooting in Parkland, Florida, we must rededicate ourselves to this task.  There have been 377 mass shootings since then, 20 alone here in Pennsylvania, including the murders at Tree of Life synagogue in Pittsburgh. Enough is enough,” he said.

In the House, Rep. Warren introduced HB 532, which mirrors Santarsiero’s SB 137.  Rep. Briggs (D-149) is the primary sponsor of HB 525, requiring the safe storage of firearms in homes where children may be present.

“It’s time to stop this culture of gun violence,” Rep. Warren said. “It’s time to take concrete steps to keep guns out of the hands of people who will do with them harm. It’s time to stand up for our schools, for our children, for our families and communities, and I’m proud to be here today with my colleague to do this.”

Former Rep. Helen Tai, who championed safe storage legislation while in the House last year, spoke about the widespread support for gun safety legislation and the local impact not of not having these laws in place.

Samantha Duckworth, a senior at Council Rock High School North, talked about her experiences as a young student growing up around the constant school shootings across the country.

A statement by Shira Goodman, executive director of CeasefirePA, praised the Bucks County lawmakers for standing up for the safety of fellow citizens.

“CeaseFirePA is pleased that Sen. Santarsiero, Rep. Briggs, and Rep. Warren are focusing on safe storage of firearms,” Goodman stated. “The absence of such laws in PA makes us less safe. There are many homes where law abiding gun owners live with people who are not legally allowed to possess firearms — because of their age, criminal history or another prohibiting factor. It is the responsibility of the gun owner to prevent access to those people — for their own safety and for public safety.  Safe storage laws educate and motivate good practices, prevent suicides and homicides, and keep us safer. Pa should join other states that have such laws.”

Santarsiero ended the event with a charge and a challenge.  “Before the torch is passed to the generation represented by these students here with us today, let those of us who currently have the power to pass legislation and affect change, act.  We need to protect everyone in our community,” he added.  “Requiring safe storage is simple, reasonable and will save lives.  Let’s make it the law of this commonwealth.  Let’s pass this legislation.”

Sen. Santarsiero has district offices in Doylestown and Newtown and can be reached via email at SenatorSantarsiero@pasenate.com. Visit the district website at www.senatorstevesantarsiero.com.

Rep. Warren has a district office in Yardley and can be reached via email at RepWarren@pahouse.com. Visit the district website at www.pahouse.com/Warren.