Senator Santarsiero Sworn into the State Senate for His Second Term in Office, Announces Appointment as Democratic Chair of Judiciary Committee and Other Committee Assignments 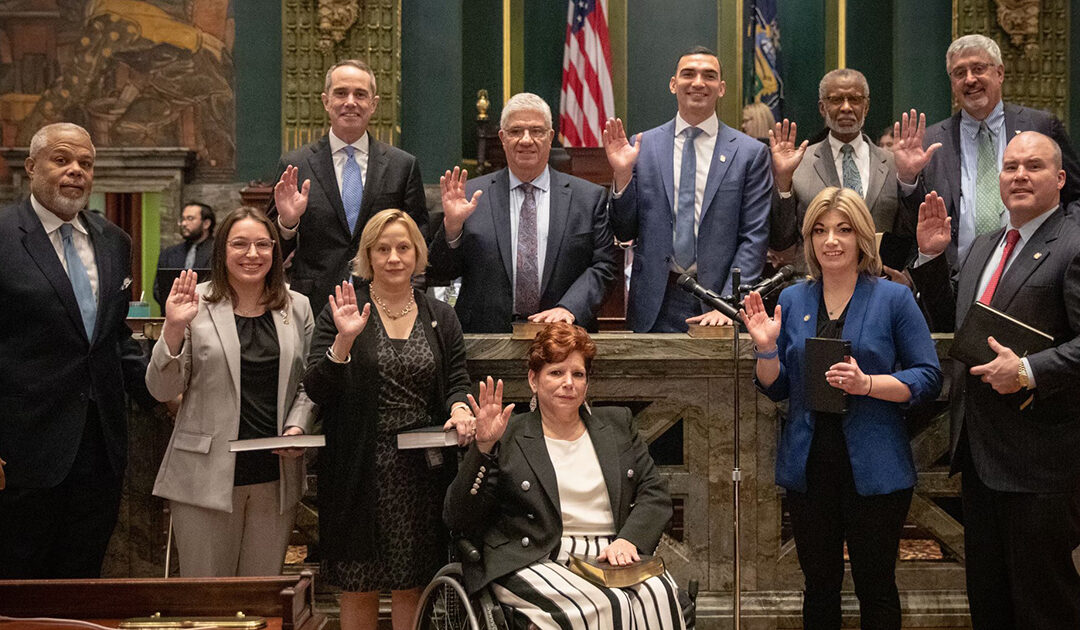 BUCKS COUNTY − January 6, 2023 − Senator Steve Santarsiero was sworn in on Tuesday for his second four-year term as a member of the Senate of Pennsylvania. Today, he announced his reappointment as Democratic Chair of the Senate Judiciary Committee as well as additional committee assignments.

Sen. Santarsiero was first elected to represent the 10th district, which includes a portion of Bucks County, in 2018. His accomplishments include amending the fiscal code in 2020 to pave the way for 8,000 permanent jobs at the former U.S. Steel site, passing Kayden’s Law in 2021 in the Senate, preserving the fracking ban in the Delaware River Basin, and spearheading a budget initiative in 2022 that established $5 million in new disaster emergency funds.

“Serving the people of the 10th district in Bucks County is my honor. I am proud of all that we have accomplished in my first term, and I am humbled to have the support to serve for another four years,” Sen. Santarsiero said. “I am ready to get back to work in the fight to preserve our environment, protect the rights of all Pennsylvanians, and pass commonsense solutions to end gun violence.”

For the 2023-2024 session, he will continue to serve as the Democratic chair of the Senate Judiciary Committee. Additional committee assignments include Appropriations, Banking & Insurance and Consumer Protection & Professional Licensure.

In reference to his committee assignments, Santarsiero added, “As Democratic Chair of the Senate Judiciary Committee, I will continue to work with Chairwoman Baker to pass important legislation that improves safety in our communities, brings quality judges to our courts, and ensures fairness throughout the legal process.

“Additionally, we will work together to pass Kayden’s Law through the Senate and get the bill through the House and to the Governor’s desk for signature this session.”

The Judiciary Committee reviews all legislation relating to aspects of the civil and criminal court systems, law enforcement and corrections, and is responsible for evaluating prison staffing, inmate populations, and housing conditions. The committee also oversees the Attorney General’s Office, Department of Corrections, State Ethics Commission, Pennsylvania Commission on Crime and Delinquency, Pennsylvania Commission on Sentencing and the Municipal Police Officers Education and Training Commission, among others.

The Appropriations Committee plays a key role in the development of the state budget and reviews the fiscal impact of proposed legislation. The Banking & Insurance Committee has jurisdiction over legislation relating to financial institutions and insurers and is tasked with overseeing the Pennsylvania Department of Insurance and the Pennsylvania Department of Banking and Securities. The Consumer Protection & Professional Licensure Committee is tasked with overseeing rules, regulations, and legislation that protects the health and safety of the public in consumer affairs. It also oversees Pennsylvania’s 29 professional and occupational licensing boards.

Learn more about what services Senator Santarsiero’s office provides by visiting his website at www.senatorstevesantarsiero.com. He can be reached via email at SenatorSantarsiero@pasenate.com.

Video of the swearing in can be found by clicking here.