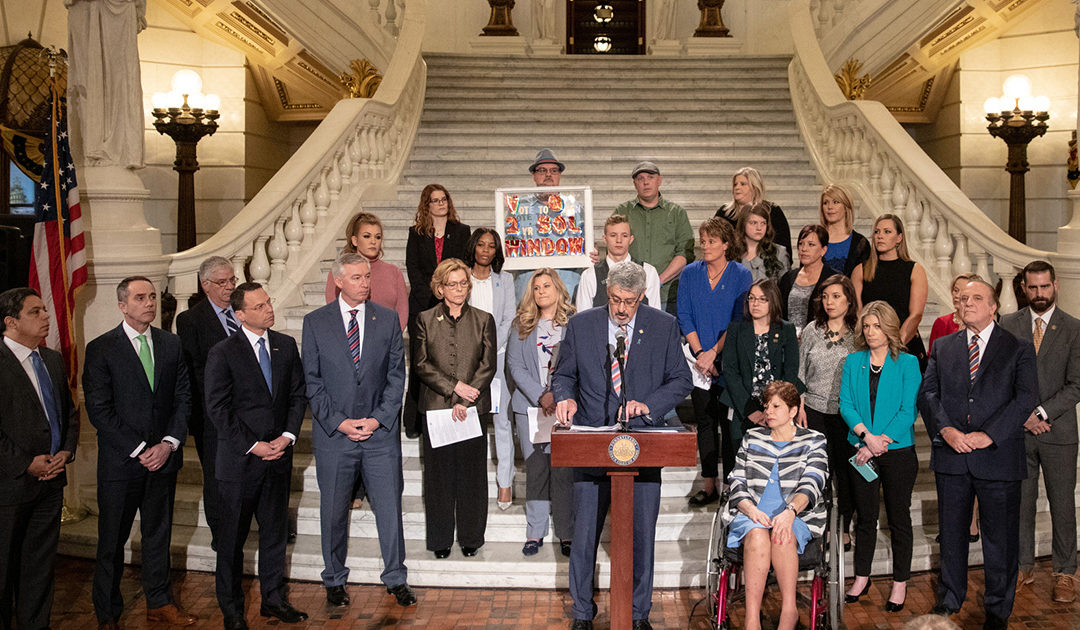 HARRISBURG, PA − April 10, 2019 − Today, members of the Senate Democratic Caucus introduced legislation to eliminate the statute of limitations for sexual offenses and open a window for civil liability.

The legislation was introduced as Senate Bill 540.

“I wanted to get to Harrisburg to amplify the voices of those who’ve gone unheard for far too long,” said Senator Tim Kearney. “Trauma does not have an expiration date; We will not limit survivors’ opportunities to seek justice.”

“I support Senate Bill 540 because it follows the unanimous recommendations of the Pennsylvania grand jury that spent two years examining widespread sexual abuse of children by Catholic clergy, and an institutional cover-up spanning decades,” Attorney General Josh Shapiro said. “Since the Grand Jury Report was released last August, 16 other states have opened investigations into clergy abuse and cover-up, the U.S. Justice Department has launched a probe, 1600 people have called our clergy abuse hotline, and 35 states are considering legislative changes like those called for by the grand jury. It’s time for Pennsylvania lawmakers to do their part.”

“Sexual assault is horrific in every instance,” said Senator Maria Collett. “This legislation acknowledges the reality of why victims are often slow to report as well as the egregious lifelong damage this type of trauma inflicts.”

“In the PA House, I worked with Rep. Mark Rozzi in trying to eliminate the statute of limitations in cases of child sex abuse,” said Senator Steve Santarsiero. “Over the past few years support has steadily built for that idea.  This should be the year that we lift the statute for all victims of sexual violence, children and adults.  Justice demands no less.”

“SB 540 is a victim-centered bill that will finally allow all survivors to choose their pathway to healing and justice,” said Senator Katie Muth. “Sexual violence and abuse is a public health crisis and we must stop this rape culture epidemic.”

“I’m hopeful that this bill will be embraced and ultimately passed with bipartisan support,” said Senator Lindsey Williams.

The bill would amend Title 42 (Judiciary and Judicial Procedure) to:

While this bill addresses the concerns of the Grand Jury report on church sex abuse, what will be introduced is not SB 261 of 2017-2018 nor HB 612 of 2017-2018, though those pieces of legislation did inform the context of this bill.

“There is a war on sexual violence in this country and in so many ways, Pennsylvania has been ground zero,” said state Victim Advocate Jennifer Storm. “I am honored to stand here with our new Senators as we add more voices to this army of support to finally change our broken system, expose those who seek to behind it and offer a path to justice and healing for all Pennsylvania’s victims and survivors.”

The Senators were also joined by a handful of survivor victims who offered remarks on the need for this legislation.

This crisis is indiscriminate of age; there are countless victims who have been subjected to sexual abuse, assault and misconduct in their lifetime. A study done by the Rape, Abuse & Incest National Network (RAINN) found that 82% of sexual assault victims are between the ages of 18 and 64. The 2015 National Intimate Partner and Sexual Violence Survey Date Brief showed that 55.6% of women surveyed were 18 years old or older when they were first-time victims of completed or attempted rape.

However, this research is based on reported abuse, assault and misconduct. The Bureau of Justice Statistics found that only 36% of rapes, 34% of attempted rapes, and 26% of sexual assaults were reported between 1992 and 2000. This data describes a marginalized population and does not reflect the real scope of the crisis due to under-reporting.