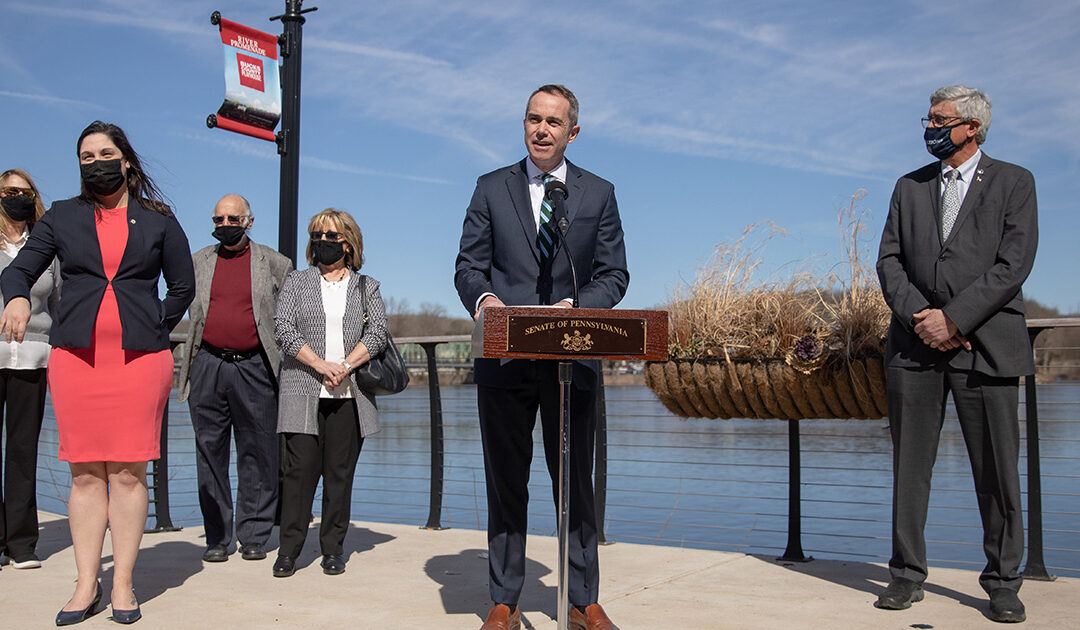 BUCKS COUNTY − March 12, 2021 − State Senator Steve Santarsiero (D-10) was joined by Democratic colleagues today in New Hope to announce their action to protect clean drinking water for millions of Pennsylvanians from the environmental hazards of fracking. Their action is in response to a lawsuit filed by Republican senators against the Delaware River Basin Commission to allow natural gas drilling in the Delaware River Basin in Pennsylvania.

Arguing for the constitutional right of millions of Pennsylvanians to clean water, the motion to intervene was filed earlier in the day in United States District Court for the Eastern District of Pennsylvania in the case of Yaw v. The Delaware River Basin Commission.  Republican caucus members had filed suit against the DRBC in January 2021, and in late February the Delaware River Keeper Network successfully intervened in the case.

“Clean water and air is a constitutional right for all Pennsylvanians, and it’s the duty of the General Assembly to ensure those rights are not infringed upon,” said Sen. Santarsiero. “The people of Bucks County – and the rest of the Delaware River Basin – have a constitutional right to clean, safe drinking water.  We are not going to allow the oil and gas industry to contaminate that water.  Working within its authority, the DRBC has been a steadfast champion for protecting the assets of the Delaware River Basin since its inception.  Thanks to the DRBC and the work of environmental advocates, an incredible amount of progress has been made over the years to clean our waterways and create a reliable source of drinking water for millions of people.  We have come too far to cede that progress to the damaging effects of fracking on our environment and land.”

“The DRBC was created 60 years ago to manage the river system and protect our water resources, including protecting the watershed from the harmful impacts of fracking,” said Sen. Carolyn Comitta (D-19), Minority Chair of the Senate Environmental Resources and Energy Committee. “The DRBC exercised its authority, with all four basin states voting to ban fracking. Individual Pennsylvania legislators don’t get to pick and choose when it comes to the compact’s decisions. We support the DRBC in its decision to ban fracking – one that upholds Pennsylvania’s Environmental Rights Amendment and protects our right to clean water.”

More than a decade ago, DRBC unanimously voted in favor of a moratorium on fracking pending the adoption of new regulations.  Since then, the Commission has received almost 80,000 public comments which have been considered in updated draft rules.

“There is mounting evidence from throughout our Commonwealth that fracking cannot be conducted safely and, in many cases, permanently and completely contaminates our shared drinking water resources,” said Sen. Katie Muth.  “I applaud the Delaware River Basin Commission for preventing this dangerous and harmful industrial activity from rendering the drinking water for 8.3 million Pennsylvanians unsafe and unusable.  Moreover, I am appalled that my Senate colleagues from the Majority Party are willing to sacrifice the health of their constituents in the name of industry profit.  Without water, our homes are rendered valueless, our public health severely deteriorates due to toxic and radioactive fracking waste, and our environment is polluted for generations to come.  I stand in defense of the public health and environmental quality for all Pennsylvanians and strongly oppose any effort to harm our drinking water resources in the name of corporate greed.”

“Clean drinking water is a constitutional right in Pennsylvania, and an imperative to our health and survival as a species,” said Sen. Amanda Cappelletti (D-17). “The Delaware River Basin delivers drinking water to 13.3 million people. We joined the DCRB to maintain the safety of that water. Legislators who are threatening that mission should be ashamed of their thinly veiled attempt at a power grab. The citizens of the Commonwealth of Pennsylvanian and the citizens of New York, New Jersey and Delaware have an inviolable right to keeping this water, their drinking water, clean.”

Five million Pennsylvanians across 17 counties reside in the Basin, which includes Bucks, Delaware, Montgomery, Chester and Philadelphia counties. The Delaware River Basin spans 6,471 square miles in the Commonwealth, across 522 municipalities.

“I chose to sign on as an intervenor in this case because I know my constituents and all Pennsylvanians take seriously their constitutional right to clean air and water,” said Sen. Judy Schwank (D-11). “It is my solemn and sworn duty to protect that right. This may be our last stand in attempting to protect the waters of the Delaware River Basin from the environmental hazards created by fracking. These waters are a drinking, agricultural and industrial water resource for more than 13 million Pennsylvania, Delaware, New York and New Jersey residents.”

Sen. Maria Collett (D-12) added, “My constituents and I know firsthand what it’s like to have to fight for “pure water” as guaranteed by the Environmental Rights Amendment of the Pennsylvania Constitution and the terror felt when that bond has been broken. The argument made by my Republican colleagues that, as trustees of Pennsylvania’s national resources under this Amendment, they must protect the pecuniary value of such resources over the health and survival of the people and ecosystems dependent on them is not just unconstitutional, it’s inhuman.”

Sen. Vince Hughes (D-7) said, “Protecting the quality of ground and surface water and the future of the Delaware River Basin has broad support from the public in Pennsylvania and the other three states impacted by the Delaware River Basin Commission. Simply put, the commission is acting to protect those interests and the right to pure water. We join in this suit to protect those rights and to prevent adverse impacts from affecting our region.”

In a February 2021 DRBC meeting the 4 member states unanimously voted to ban fracking in the Delaware River Basin. During the special meeting, the United States abstained from the vote, but indicated support for the result.

“My colleagues and I are intervening to fight for the 13 million people who get their water from the Delaware River Basin and protect the Constitutional right of all Pennsylvanians to clean air and clean water,” said Sen. John Kane (D-9). “The DRBC voted unanimously to ban fracking after hearing tens of thousands of comments over several years — that’s what our communities want, and that’s how to keep Pennsylvanians safe. I’m proud to stand alongside my colleagues in intervening in support of the DRBC.”

“I’m proud to stand side by side with my colleagues in the Senate’s Democratic Caucus in support of the Delaware River Basin Commission’s decision to permanently ban fracking. This hard-fought, hard-won decision was years in the making. It is a victory for advocates, organizers, the millions of people who live within the river basin, and for the river itself. My entire district is not only within the basin, but runs along the Delaware River. I’m grateful to DRBC for protecting the lives and livelihoods of my constituents, and I’m grateful to my fellow Democratic Senators for setting their stakes in the ground with mine.” Senator Nikil Saval (D–Philadelphia)

Environmental groups have long advocated for protecting the Delaware River Basin and for the constitutional right of all Pennsylvanians to clean air and water.  They shared their overwhelming support for the Democratic Senators’ intervention in the lawsuit in written statements.

In a statement read during the press conference, Conservation Voters of Pennsylvania said, “We would like to thank Senator Santarsiero and his colleagues in the Pennsylvania Senate for filing a motion to intervene in Yaw v. DRBC. Thousands of residents and countless elected officials and experts have spoken out in support of banning fracking in the Delaware River Basin.”

Maya van Rossum, leader of the Delaware Riverkeeper Network said, “The Delaware River is irreplaceably important to our entire region.   To allow it to be sacrificed to the fracking industry, to be used to advance the climate crisis, and to be used to help advance an industry that is devastating the health, safety, lives, property values, quality of life and local economies of entire communities is indefensible.  It is even worse that the republican legislative caucus, Senators Yaw and Baker would be seeking to misuse Pennsylvania’s constitutional environmental rights amendment and to deny Pennsylvania’s support for the Delaware River Basin Commission is an abuse of power and trust.  I would like to thank Senator Steve Santarsiero and the legislators of the Democratic Caucus for seeking to join the ongoing lawsuit so they can rise up and defend our river, our environment and the environmental rights of the people of Pennsylvania.”

“PennEnvironment applauds the state senators who’ve come together today from across the Delaware River watershed to stand up and defend this great river,” said PennEnvironment Executive Director David Masur in a written statement.  “Fracking shouldn’t be allowed anywhere, much less near an iconic natural waterway like the Delaware River, which provides drinking water for millions of Americans. Given that local Pennsylvanians voiced their overwhelming support for protecting the Delaware River from fracking during the public input processes, it’s unfortunate that the elected officials who are the plaintiffs in the ‘Yaw v. DRBC’ case are using the courts to undo the will of local residents.